As Londoners we always get excited when an opportunity rises to visit one of its many monuments, however it is not every day that we get invited to visit the Mayor of London’s office…This was the 2nd time for us; the 1st time was in 2003, just a few months after it opened. This was a collaboration with a customer and we exhibited a large print showing an image of Tower Bridge.

This time it was a bit different. London’s Air Ambulance have invited us to take part in an event hosted by Caroline Pidgeon, member of the London Assembly and Deputy Chair of the Transport Committee and Joanne McCartney, Deputy Mayor. It was held at the London Living Room on the top floor and the 200 guests included donors, charity trustees, business and corporate partners, ex. patients, doctors, paramedics, pilots and consultants from the team.

June 19th was the hottest day of the year which meant the doors to the panoramic viewing balcony were kept open!

In the first image, if you look closely (click on the images to open them in a new window, then click again to zoom in), you can see the Royal London Hospital, to the Left of Tower Bridge. If you move a few cm to the Left again, yo can see the Red helicopter, just between the Hospital and a couple of big cranes. It took off and made a flyby along the river just above City Hall.

We then all watched a short video which was filmed a few weeks ago by the amazing Pro Create team (click on the link below the image to watch the video): 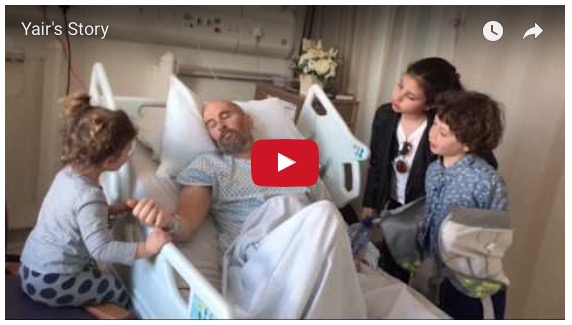 Needless to say that there were a few tears that were shed by more than a few people in the audience. We stayed there for a few hours, chatting to people, telling our story to donors and trustees, and sharing and exchanging experiences with fellow ex. patients and their families: A guy who lost his Left arm in the 2016 Croydon tram derailment, A guy who was involved in a motorbike vs brick wall accident less than a year ago, who suffered a severe head injury and was in a coma for a few days, A lady who had lost her leg in a car accident and young Victoria, who nearly lost her life at the end of 2014 when she was hit and run over by a lorry while riding her bike in London. She met “her” driver in court a year later and forgave him.

It was a very special night that we will remember for a long, long time. Being there with a group of people all joined by the same misfortune on one hand, but that are also fortunate to still be around and to be able to participate, support and enjoy being part of the Charity’s family.

In our continuous efforts to help the charity, we picked up a fun and an educational way to raise some funds. Our children have organised a couple of cake sales at their schools and between those two sales we have managed to collect just under £700. This sort of money covers the jet fuel costs of Two missions of the London’s Air Ambulance helicopter, so in a way we have helped saving two lives in London. Who knows, maybe one of those are the lives of a fellow cyclist?