Apparently, I woke up in the ITU (Intensive Therapy Unit) several hours after the operation, but I don’t remember anything from there. I do remember waking up in Ward 12D, on my back, with some tubes and lines stuck everywhere and with some intense pain in my lower abdomen. Yael was there and told me about the day’s events: The op took a few hours and they have managed to re-align the two sides of the pelvis, fit in those two big screws (can be seen in the x-ray at the bottom of the previous post, the top one is 18cm long!), fit a fairly large plate at the front of the pelvis that holds together the pelvis bone and the smaller bones next to it. I also had a Supra-pubic catheter – this is a tube that goes into your bladder through the wall of your tummy allowing for free drainage of urine and in my case, also blood. It also became my close friend for the next 8 months…we’ll get to that later. The other catheter was the more common one…

Then there was a line in my left arm for intravenous antibiotics, and in my Right arm I had another line with another, magical IV…I say magical because this was morphine and it came with a plunger-type remote control…basically this means that when you feel the pain you press the button and it just pushes another dose of that opiate drug straight into your blood stream. It takes some of the pain away and if you do it more than 2 or 3 times in a row it sends you to sleep. So you can imagine (can you?) that the next couple of days I was sort of playing with this wake-sleep-wake-sleep thing…

The following 10 days I wish I could forget, but I can’t. One side effect of taking opiates and being static is constipation. They want you to start eating so that your system can start working again and that you can gain some strength back. It is worth mentioning that due to the trauma and the lack of food, I had lost 13 kilogrammes in the first 4-5 days, that’s 29lb or 2 stone in British money…the view most of the time was of the Beige curtain surrounding you. Since you lie flat on your back the whole time, you basically loose any visual perspective…everybody look really tall.

Four badly injured men in one room, each cocooned in a curtained cube, busy dealing with their own suffering and trying not to hear and not to be affected by the others’ crying and screaming…it’s all about pain handling and management, or rather the lack of them. When pain kicks in you first try to analyse it and figure out where it’s coming from: is it the legs? The back? The backside? Constipation? Or is it the bladder that is going into spasm again? If you’ve never heard of bladder spasms I hope you’ll never, ever get any. They can last hours (or days in my case) and make you produce some impressively loud, high pitch groans and whines. Every now and again One or both of the catheters would block up with blood clots and would stop draining…It takes a few minutes to realise that this has actually happened and call the nurses. The way to “unblock” the tubes is quite simple: you (or the nurse) use a 50ml syringe full of saline water, connect it to the catheter and push the water through, then carefully start pulling. If the blockage is only caused by some small clots or “debris” then one pull might be enough but sometimes you can end up spending an hour pushing and puling and sometimes you do it on BOTH catheters, all while trying to battle or to just ignore the pain caused by the spasms…and ending up with these long, stretchy bits of clotted blood filling up the syringe. This is the kind of experience I would not wish even to the worst of my enemies!!!

Doing your “business” involves calling & asking someone to bring you a bedpan. They then help you roll over to one side and rolling back until your somehow positioned over it. When you’re done you call again and have your backside wiped. Later on when I gained a bit of strength it evolved into manoeuvring your body from being flat to somehow bridging over the bedpan. I keep telling people that when you go into hospital as a patient, at least as a trauma patient, you leave you dignity and any sense of privacy at the reception upon checking in. You find yourself lying on the bedpan, huffing and puffing and have your blood sample taken at the same time or even funnier, have a group of nurses and doctors doing their round or doing a handover. They all claim their not sensitive to the smells…I somehow doubt it!

There’s also the human side in all this…nurses, doctors, phlebotomists, pharmacists, cleaners, caterers…and they all have personalities, characters, hierarchy, politics…and you are right there in the middle, trying to figure out how to get the best “service”, how to get all the information you need, how to provide feedback and how to prevent mistakes from happening. And those DO happen because we’re all human and because a hospital is a large organisation and a very complicated one at that.

As a trauma patient you can find yourself in some rather awkward, intimate, embarrassing situations and some of these people can be absolute angels, giving so much support far and beyond what they are trained or paid for and still being humble and polite even when under a lot of pressure. As a patient you can be very sensitive, or abusive, or appreciative and they still have to do their job and take care of you.

However the biggest angel by far has been MY angel, otherwise known as my wife, Yael. She was there every single day,  from morning till night. Looking after me and doing the legwork to ask, beg, find, harass, cry, shout, argue, thank…whatever it took to keep me going. All that while managing a house with three young children, with their needs and she still had room left to care about my neighbouring patient, ask them how they do and call someone when they needed help.

We eventually went home after 4 weeks. I was in a wheelchair, equipped with a bag full of medications, a suprapubic catheter (the one stuck in your tummy), a care plan that meant a carer was coming in every day to help me wash myself, on a chair in the kitchen.

Here’s me being rolled into the house, the journey in the ambulance was knackering as the image tells… 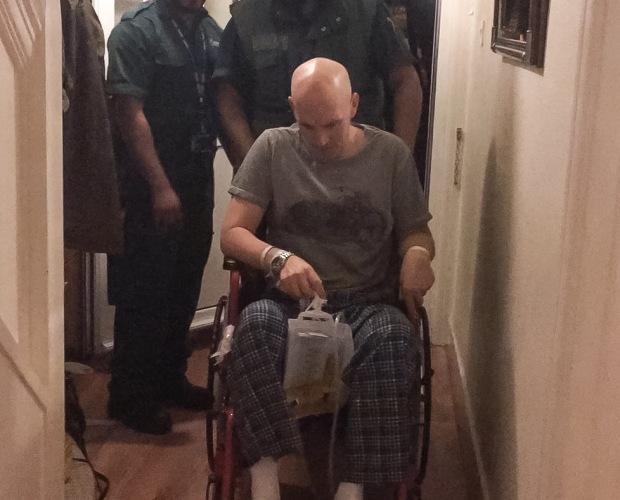 We’ve set up the living room so that I can live downstairs and we had an appointment set for a week later were they were looking to see if I can stand up and start learning how to walk again.

Coming home for me was a happy yet difficult experience for me and perhaps more so for the family. At the hospital you feel “safe”…you have a button for everything and there’s always a team who can rescue you should bad things happen. You are in the centre. At home you are obviously a king but even as a king you have to fit into the house’s routines, you also try to be a part of it again. We soon realised that there are times when the Post Troumatic Stress Disorder (PTSD) raises its ugly head and can make you burst into tears, or burst in anger, or just shrink into your own bag of self-pitty and not talk to anybody for hours and days.
The story did not end there, unfortunately.

I’m signing this part off on December 31st, the last day of 2016. I’m at home with my family and we’re looking to spend a quiet couple of days and to kick 2017 off with some good energy and big hopes. I’ll be back soon with the next hospital adventure. Happy new year everybody! 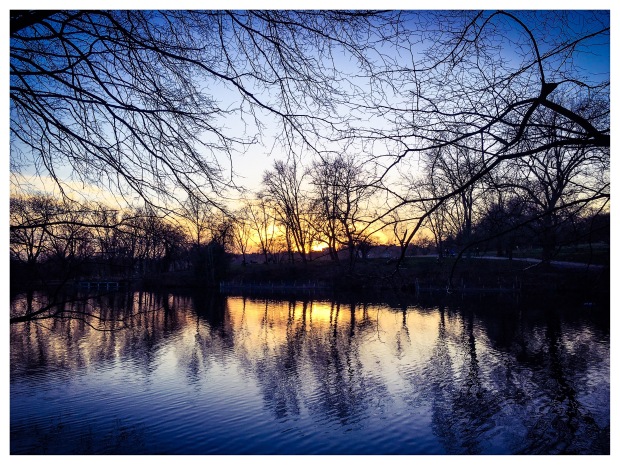